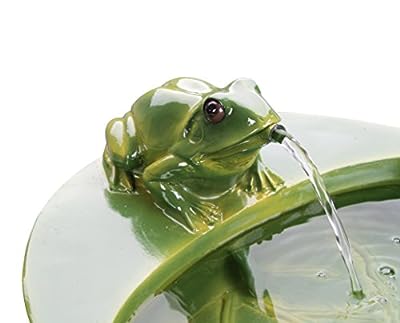 Price: £114.99
As of 2020-01-23 04:15:39 UTC (more info)
Product prices and availability are accurate as of 2020-01-23 04:15:39 UTC and are subject to change. Any price and availability information displayed on http://www.amazon.co.uk/ at the time of purchase will apply to the purchase of this product.
Buy Now from Amazon
Product Information (more info)
CERTAIN CONTENT THAT APPEARS ON THIS SITE COMES FROM AMAZON SERVICES LLC. THIS CONTENT IS PROVIDED 'AS IS' AND IS SUBJECT TO CHANGE OR REMOVAL AT ANY TIME.

This delightful and entertaining water feature makes a great talking point for any garden. Featuring a playful frog and three levels of cascading water falling from lilly pad to lilly pad, this water feature is sure to bring a little joy to your garden.

Harness the energy of the sun to power your water feature. Not having to wire this feature to your house means it's much easier to move about your garden if you decide it would look nicer elsewhere.

This entertaining water feature is sure to delight friends, family and neighbours. Featuring three levels of cascading water, playfully pouring from lilly pad to lilly pad. This feature adds a touch of frivolity to any space in your garden.

Carefully crafted from high quality polyresin, this water feature is UV and frost resistant. This helps your water feature keep its colour in areas of bright sunlight, and avoid frost damage during the colder months. Polyresin is also very lightweight, weighing much less than an equivalent stone water feature, making transport and positioning in your garden much simpler.

As an entirely self contained system, this water feature doesn't require an additional reservoir and it can be placed anywhere in your garden, even paved or decked areas, as long as the solar panel can get some sun!

Solar powered - saves you time, effort and money in wiring up to the mains Quirky and fun design - enchant your garden guests, friends and family with this engaging and entertaining design Polyresin construction - polyresin is both UV and frost resistant, benefiting this feature in bright sunlight or frosty weather Self contained system - being self contained saves you time and effort digging an additional reservoir

Cookies help us deliver our services. By using our services, you agree to our use of cookies. Learn More Accept